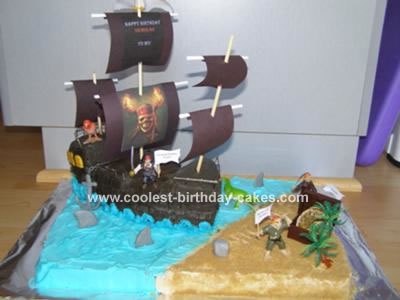 I let my kids and nephews choose the theme for their birthday cakes and for his 7th birthday my nephew requested Pirates of the Caribbean. After looking at all the pirate cakes on this site I decided I was going to attempt a pirate ship cake, namely the Black Pearl.

I started with an 11×14 1 layer sheet cake. I iced just over half of it in blue buttercream and swirled the top with a knife to add a rippled effect. I iced the rest in light brown buttercream and then sprinkled brown sugar over it for sand.

The pirate ship is one loaf pan carved into the shape of a pirate ship. That part was a little tricky and took some time. I iced the ship in black buttercream and then went over the sides with a basket weave icing tip for a wooden effect.

The windows on the ship and the anchor, as well as the shark fins, are made of candy clay. (Recipe can be found on the Wilton website.) The railings are made of toothpicks glued together and painted with black food coloring. Jack Sparrow and the chain for the anchor were from a Lego set. I added blue buttercream waves at the base of the ship.

The masts are made of skewers and lollipop sticks and the sails are construction paper, along with images I printed off the computer.

The trees, pirates, animals and treasure chest (with chocolate coins) were purchased at a dollar store.

They’re not legible in the photo, but the signs the characters are holding say, “Eat up me hearties, yo ho!”, “But why is the cake gone?” (Instead if “But why is the rum gone?” from the movie), and “Aargh!”