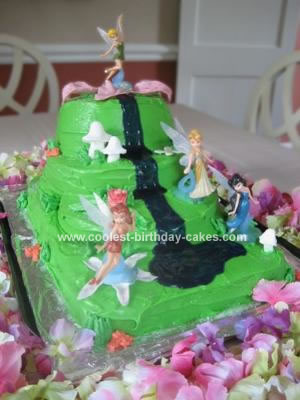 The large Pixie Hollow Birthday Cake served as the base. I put two of the round layers on top of the large layer at the bottom, slightly stair-stepped. I cut the third round layer in about half into a moon shape. I did this by setting one of the other round layers about halfway on top of it to use as a template.

Once I cut the moon shape, I put it behind one of the round layers, in order to hold up the second round layer. Finally, I cut some of the top off of the Pyrex bowl hill, so that it had a larger space at the top for my flower. I put the hill on top of the round layers. I used cream cheese frosting which I colored green with Wilton’s leaf green color to frost the entire cake (Yummy!).

Then I made the pink flower on top out of fondant which I colored pink with pink food coloring (it took a lot of kneading of the fondant to get the color mixed well). I cut out each petal by hand (what I thought looked like a leaf), rolled along the edges to thin them out, and then they took the shape of a leaf. I set them to dry in some small fluted ice cream bowls I have, so that they would keep the petal shape as they dried. When they were dry, I painted them with a regular paint brush and a mixture of lemon juice and some pink shimmer (found in cake decorating aisle at Michael’s or AC Moore). I did this because you cannot paint directly on fondant with water or it will melt the fondant. The acidity in the lemon juice (you can also use vodka or almond extract) allows the medium to go on the fondant without damaging the fondant.

I made the mushrooms out of fondant that I did NOT color – I kept it white. I rolled up about 1″ wide pieces of fondant to make the base of the mushroom. I then cut out small circles for the top of the mushrooms, which I formed around the end of one of my daughter’s large rounded pen tops to get the shape. I let them all dry, and then put some white icing inside the bell of the mushroom to attach it to the base.

I made some other little doo-dads and decorations out of fondant as well, and these I painted directly on the decorations (flowers, etc.) with food coloring mixed with lemon juice.

I piped what was supposed to be grass, but ended up looking like bushes, all around the cake (This was my first experience with piping OR with using fondant). For the piping, I did NOT use the cream cheese frosting that covered the cake. I made Wilton’s recipe for buttercream frosting for the piping. I piped both the grass/bushes and some orange flower-like things around the whole cake as well. I attached the mushrooms and all other decorations to the cake with the green-colored buttercream piped frosting

I made the waterfall out of blue gel that can be found in the cake decorating aisle at Michael’s or AC Moore. I simply made a line with the gel for where I wanted the waterfall to be, and then kept squeezing more out to fill it all in. I used a knife to spread the gel a little bit.

For the final touch, I purchased a set of fairy characters from the Disney store (which ended up being a gift for my daughter) which I put on top of the cake. My daughter (who turned 4) LOVED this cake…her comment at her Tinkerbell party, to one of her friends, was “Isn’t this the coolest cake you’ve ever seen??!!” Score one for Mom! This was a lot of work, but very worth it, and I was able to do it with NO previous cake decorating experience. I just did a lot of research online (on how to use fondant, etc.), and had my own desire to give my daughter an amazing cake to spur me on!