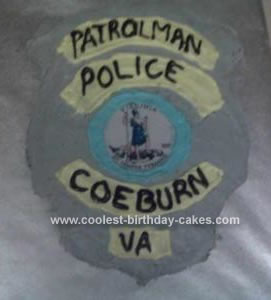 I made this police badge cake for my fiancee’s birthday. I wanted it to look as much like his badge as I possible could while making sure I had enough cake to feed everyone! So I used two boxes of chocolate cake mix and baked in strange but true, an aluminum turkey pan!

My mom and I had cut out the shape of the badge on paper and once the cake was cooled in the pan, I cut around the paper. I had a rather thick cake but it was great. It was very moist although it took it quite some time to bake. The only thing that was not made by me was the Virginia seal in the middle of the cake. I had printed a picture of it off of the computer and took it to a local bakery and had them print it off on sugar paper.

I was shocked with how well it all turned out, looks so much like his badge! (This was only my second attempt at something more than a normal cake!)