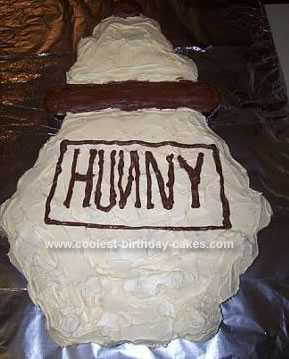 My daughter had a Winnie the Pooh themed party for her 2nd birthday. I wanted to try a cupcake cake, and the Pooh Hunny Pot Cupcake Birthday Cake idea came to me.

I baked around 3 batches of cupcakes, each batch a different flavor. (This gave the guests a variety from which to choose.)

After playing around with the shape a little bit, I arranged the cupcakes into the shape of a honey pot onto a very large piece of heavy cardboard.