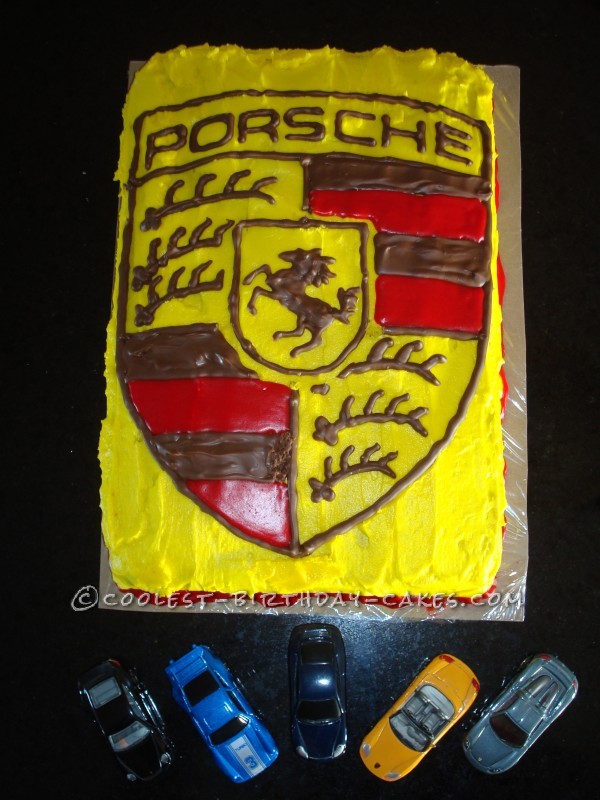 This Porsche logo cake was for my 9-year-old son’s birthday. I baked a rectangle cake and iced it with bright yellow icing. I had printed a copy of the logo that I got off the Internet and laid wax paper over the logo. I melted milk chocolate candy melts in the microwave, spooned some into a Ziploc bag, and snipped a tiny end off the bag.

Then I traced the swords, PORSCHE letters, and horse in chocolate on the wax paper. I did a few at a time and kept remelting the chocolate as needed. If the chocolate in the bag got too hard before I used it, I either peeled it off the bag into my bowl to melt again or just started another bag. I lightly traced the outline of the logo onto the cake with a toothpick and used the melted chocolate to fill in the outline directly on the cake.

I was worried that the melted chocolate would melt the cake icing before the chocolate had a chance to harden, but there were no troubles since I had iced the cake the day before. Once the chocolate swords, letters, and horse were hardened, I lifted them off the wax paper onto the cake. I finished the rest of the lines and thick stripes by piping the melted chocolate directly on the cake. Lastly I used a tube of store-bought red icing to pipe the red stripes onto the cake.

My son laid his Porsche cars around the cake, and it was done. I am not a professional or an artist, but it was not that hard to trace the designs in chocolate. Plus if one of the swords or the horse doesn’t look quite right the first time you practice, just slide off the first piece of wax paper and put another one on the logo for a second attempt.