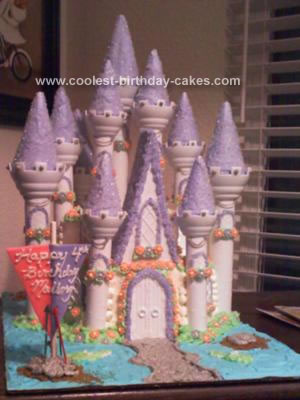 I made about 250 fondant flowers using a flower fondant stamper and piped a yellow into the center of each one. After making the round cakes and frosting them with white butercream, I piped green leaves using a leaf tip around the edge of the cakes and the bottom of all the windowsills. Then I stuck the fondant flowers on the leaves. Then I piped silver dots and ribbons on the towers.

I then started sticking all the towers into the cake wherever I wanted them. To clean it up I piped round white dots in all the edges where the towers where stuck in the cake. Then I piped more green leaves around the bottom of the cake and put more fondant flowers on top of the leaves.

To make the flag, I cut out fondant triangles and let them harden in the freezer. Then I used water to stick the two triangles together. I then piped some frosting on the back and stuck on a wooden candy dowel. After it dried I piped her name on it. I piped some water and a stone bridge. I also used some brown sugar to create little sand banks and piped some rocks and two little alligators in the water.

Lastly I suck the flag in the rock and while it set I used toothpicks to secure it, which were later taken out. The kit made it much easier but it was very time consuming to do all the details, and pretty difficult to move.