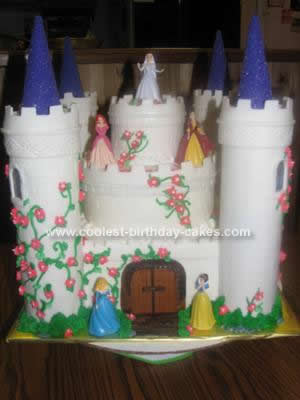 The Homemade Princess Castle Cake Idea is made using three tiers of cake. The bottom cake is a 12 inch square that I lightly frosted with almond decorator icing around all four sides and went a little heavier on top. Once I crumb coated the cake I rolled out white fondant and took a ruler to make lines straight across my sheet. I then used a knife to make the small lines to make it look like bricks.

After the fondant was ready I wrapped it around the cake only going the height of the cake. I left the top of the cake uncovered and I did apply the fondant in sections to make it easier to handle. After the bottom layer was covered and ready for the second tier I cut out the corners of the cake to fit my towers to.

To make the top rails around the cakes I rolled out the fondant, cut the width of a ruler and took a cookie cutter that had a square end to cut out the notches, applied water and applied to the cake top edges.

I was trying to figure out what I could use to make the towers out of that wouldn’t be so heavy. I was going to use rice crispie treats but happened to look on my counter a see a couple of Pringle cans so I decided they would be light enough and a perfect size for my cake so I covered them in icing and then in fondant. I Googled stained glass windows and found pics small enough to print off and cut out to use for the tower windows. I put clear tape over the picture to protect them from the wetness of the icing.

To make the cones I used sugar cones covered in purple fondant. I brushed them with a glue I made using water and meringue powder and rolled in purple sugar crystals and then placed on top of each tower using the same glue. Once I made all four towers and was ready to place on the corners I applied royal icing to the bottoms and glued to the cake board and used a little between the sides and the cake to secure the hold.

Once I placed the towers I piped on the vines and flowers. I then prepared the second tier repeating what I did for the first tier. Before placing on top of the first tier I made a circle in the center of the cake so I would know where the cake would be placed and I inserted cut off straws for dowels to help support the next layers. Before you place your second tier sprinkle powdered sugar within the circle so when you go to remove it for cutting it doesn’t take all your icing with it. Repeat steps for the final tier and finish piping ivy and flowers.

To make the door I just mixed different shades of brown fondant, rolled out and cut to look like a door, wet the back with a little water and applied to the cake. Place your princess dolls and your done. 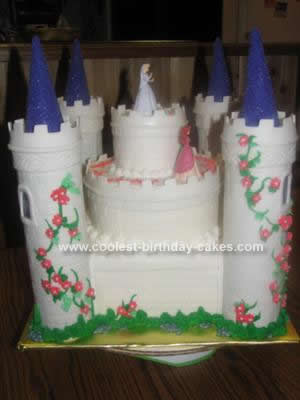 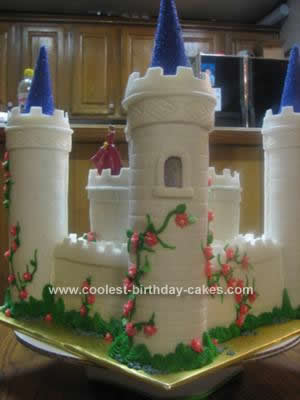