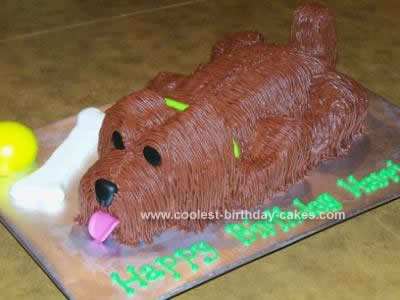 I baked a pound cake in a loaf pan (bread pan), two 5 inch round cakes, an 8 inch square cake, and a jumbo cupcake for this Puppy Birthday Cake. I carved the top of the loaf cake into a more rounded shape for the back of the puppy. I put frosting between the two 5 inch round cakes and trimmed off about half of an inch from one side. I stood the cakes on end, right next to the loaf cake, and this became the puppy’s head. I then notched out the top a little bit to form a general ear shape. The cupcake was trimmed and became the puppy’s snout. From the square cake I cut a tail and four legs. I used dowels to secure the tail, legs, and head to the pound cake.

For decorating I made chocolate buttercream icing. I crumb coated the entire cake and refrigerated it to firm it up. I fitted a piping bag with a #3 round tip and piped long strands of “fur”, beginning at the middle and pulling down toward the cake board. I continued over the whole cake, going over the same spots over and over until I got the desired results.

I made eyes, tongue, nose, collar, and puppy toys from rolled fondant.