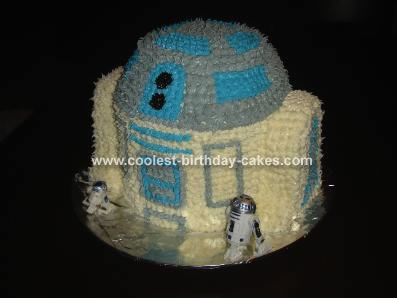 I based my R2D2 cake on a few already on this website. They are all so amazing.

I baked 4 8inch rounds, 1 9×13 sheet, and 1 cake in a Pyrex bowl (for the top of his head). 4 boxes of cake mix and 6-7 tubs of white icing were used, plus Wilton’s black and royal blue icing paste (the paste is best because it keeps the icing from becoming too thin).

Once cooled and level, I stacked the 4 rounds and bowl cake using white icing between. I was going to use a dowel to stabilize the cake but it didn’t seem to need it. The cakes are very heavy.

I cut two arms from the 9×13. They looked like rectangles with a foot. Using icing, I attached them to the body. The entire cake was iced with a thin layer of white icing before I used the Wilton star tip #18 for the outside.

Using the star tip for the outside allowed me to put about 20 toothpicks between stars around the cake so I could cover it with wrap for refrigeration and transport.

Have fun. Your kids will love it!