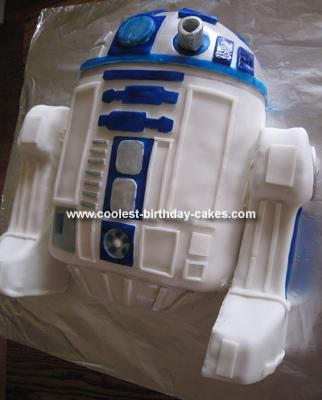 My 6 year old son is a Star Wars fanatic. I guess we made him that way by introducing him to the the movies, which are classics. So for his party this year the theme was Lego Star Wars, which he loves as well. I was originally intending just to do a Lego block till he informed me he really wanted an R2D2 cake.

I had an idea in mind and I did a search of birthday party ideas and came across this site for cake and I saw all the fabulous cakes that inspired me to go for it. I wanted it to be 3D but was not up for the staked cake version, so did a compromise and did a 1/2 round.

It was made with 3 – 13 x 9 in cakes one vanilla and 2 chocolate. I layered a chocolate on the the vanilla with a strawberry cream center filling. As the chocolate cake kind of rose in the middle it actually made the 1/2 round shape pretty easily. I cut the top edge using a plate to make the round shape, then sculpted it to make it the right shape. I cut the leg shapes out of the third cake and crumb coated all of them and put them in the fridge over night.

The next morning it was my first attempt at fondant and thankfully the body shape was pretty easy, but the legs were a bit difficult. I had to use my sewing knowledge of draping to cut the fondant as I wasn’t sure how to form it around all the corners. I think it came out okay.

After the first fondant layer was done I used silver dusting powder for the top part of his head, and used a skewer to “draw” the detail shapes into the fondant.I used the scrap fondant to make all the other pieces and found a rotary cutter comes in handy when cutting long skinny pieces. I used blue frosting tint as for some of the pieces and looking at pictures of the real R2D2 built it with some modifications. I made sure I put on the important pieces that give R2 his “look” then just added squares and such to give it interest.

The best thing was when my son said “Mom, you did a great job!”