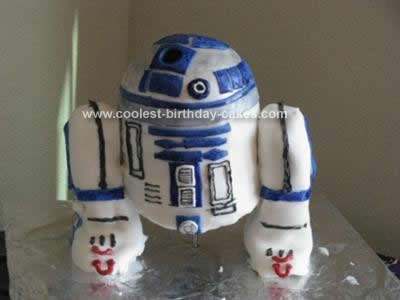 My son chose a R2D2 Cake Design for his 4th birthday cake (he and daddy watch Star Wars, including the newer cartoon versions, often).

I baked various round and square cakes and basically cut the shapes I wanted for the body and “arms” of R2D2. I used a Pyrex bowl for the head.

I don’t yet own an air compressor, so I hand painted the body of R2D2 as well as any pieces and parts (also out of fondant), which were “glued” with buttercream.

I baked cupcakes and decorated them with colors and stars to match since I didn’t think the R2D2 was gonna be enough to feed everyone at the party.