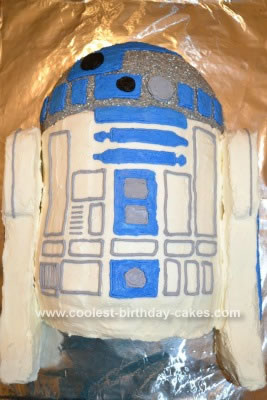 I made this cake for a friend whose son was having a Star Wars birthday party. She just said “a cool R2D2 cake.” I immediately got on this website and started searching through cakes for ideas. This is the best site!

I started with 2 8” round cakes for his body. I stacked them with frosting in between, and then cut them in half. I put frosting on the top of one set and then stacked all four halves together and laid them on the cake board, cut side down. I used a dome-shaped pan to make the head. I cut that in half and used half for the head, and then cut a generous slice off the other half and stuck it on the bottom side to provide a little more shape. The 8” rounds were yellow, the dome cake was chocolate.

I used at least 4 recipes of Wilton’s butter cream frosting to decorate. First I did a crumb coat with all the different pieces to make sure they would all stay stuck together. Then I used the cake icer tip to do the body to help keep the butter cream nice and smooth. I made the legs out of Rice Krispy Treats and coated them with a thin layer of butter cream and refrigerated until hard.

Then I pressed them up against the cake body and covered them with more butter cream. I colored some icing gray and iced the head with a spatula. I then used silver glitter sprinkles all over the “dome” to make it look shiny. That turned out to be one of the hardest parts, but it looked really good when it was done. I sketched out what I wanted the body to look like, based on pictures I found online.

After the icing had crusted, I drew the details in the icing with a toothpick, then piped it on with gray and blue icing. Then I piped the details on the head, free-hand. It was hard getting the butter cream to stick to the sprinkles, but it turned out okay in the end.

My friend and her son both loved the cake – nobody wanted to cut it! Thanks for the great suggestions.