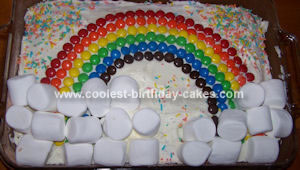 My daughter was having a unicorn rainbow party for her 3rd birthday and I couldn’t decide what to do for her cake until I saw a Rainbow Birthday Cake on this site. I really liked the idea of the M & M cake because my daughter could help me decorate it.

I used a glass 9 X 13 pan and used a box of cake mix and a tub of icing from the store. I just used white icing but you could easily use blue food coloring to make blue sky for this cake.

The first thing we did (after washing our hands) was to separate all the M & M’s into different colors. After the cake cooled, I put the white icing on. Then I took a toothpick and drew 6 lines for the rainbow. I knew M & M wouldn’t have all the colors in a rainbow, but I still tried to arrange them in proper rainbow color order. I ended up with red, orange, yellow, green, blue, and then brown. I know brown is not the same as purple, but it ended up looking really good on the cake. I made sure to turn the M & M’s so that the little m’s on the candy were down and the blank side was up.

When I traced the rainbow lines, I left some room at the bottom for the clouds (marshmallows). You could do this with the miniature marshmallows, but I picked the big ones because I let my 3 year old put the clouds on herself. After the clouds were in place, I let my daughter put sprinkles all over the rest of the cake. I only wished I had unicorn and Pegasus figurines to put on her cake. Later I got some cute Schleich ones from Amazon (but not in time to get them on the cake).

This was an easy and fun cake to make. My daughter had a lot of fun helping me decorate it.