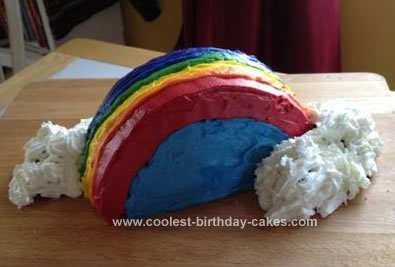 My four year old daughter announced that she’d like a rainbow cake for her going away party. I started to do some internet research; I had no idea that it was such a phenomenon! I knew I wanted to make the cake rainbow, as well as the frosting.

The shape was going to be difficult; cutting and shaping 6 layers of cake seemed unstable. Then it occurred to me that if I cut the cake in half, I would have an “arch” shape already and I could color the rainbow looking down.

I was also concerned about using a lot of food coloring which can taste bad, and did not want to resort to box cake.

I used the recipe I found on raspberricupcakes.com for “purple ombre sprinkles cake”. I used a digital scale to help divide the batter into 6 bowls, which I colored using Wilton’s gel (no icky flavor). I baked the cakes three at a time in 8″ rounds that I had sprayed, floured, and placed a parchment paper inset into; about 11 min (I actually baked the cakes, cooled them, wrapped them and refrigerated them two days before the party).

The next day I halved each layer and stacked them with a lemon butter cream and lemon curd for moistness and flavor. I used the same frosting for a crumb layer. Then I refrigerated the two arches til the frosting was cool and firm.

My daughter helped me mix up the colored frosting in seven different bowls (one extra for sky blue), and we loaded up seven pastry bags. (I used the home-made version: snipped corner of a Ziploc bag). I ran the colored frosting over the corresponding cake layer, and filled the under-arch area with the sky blue frosting.

Then we covered the cakes with a cake dome and let them refrigerate and firm up until the party the next day. I intended to add clouds with cake bits and frosting, but ended up using whipped cream. It melted quickly, but looked nice for a bit and tasted great!

My daughter loved the cake! It turned out vibrant and the layers totally fit with the frosting. The flavor of the cake was excellent; next time I would try a different frosting recipe. 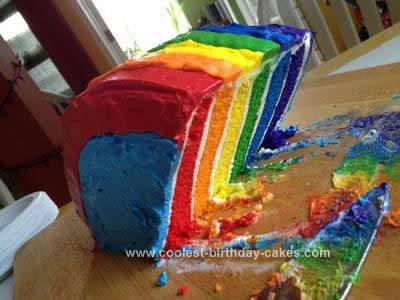 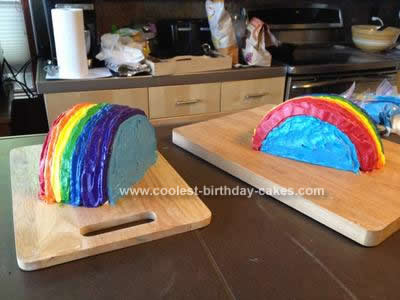 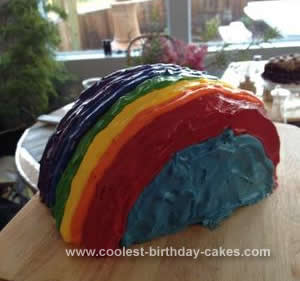