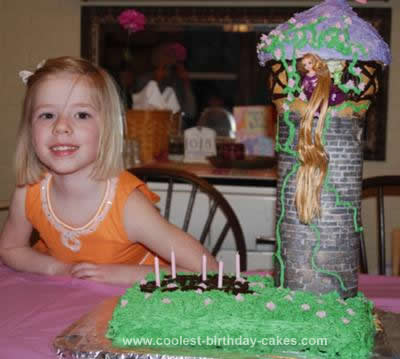 Finding a Rapunzel or Tangled cake idea just did not exist, so I developed this Homemade Rapunzel Birthday Cake Design one on my own. I used a 9×13 cake pan for base. The tower is a 12″ PVC pipe wrapped in scrapbook paper. The top of the tower is 2 round cake pans stacked (frozen and trimmed) and I had one of those large cupcake molds that I used the top only to form the cone shape.

I glued cardboard to the PVC pipe, then placed the tower on the cardboard. I decorated the tower top while ON the tower. Then decorated the 9×13 base. Then carefully stuck the tower into the cake right before the party. I used a Polly pocket Tangled doll for the window. Decorating the top of the tower took the most time, but was well worth it for my 5 year old’s reaction. 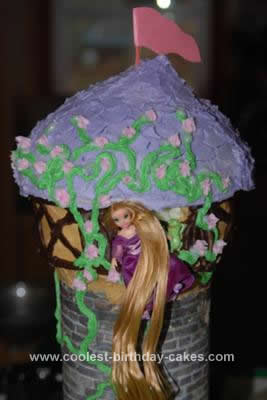