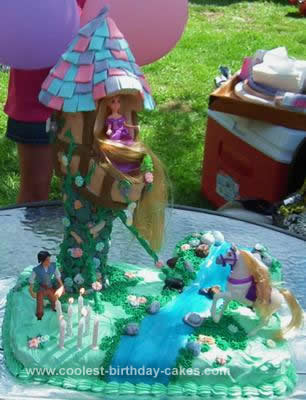 My six-year-old daughter asked to have a Rapunzel Birthday Cake Design this year. She and I searched for ideas together. She decided she wanted a tower and a river on her cake. I told her I would do my best!

I used a 9×13 white cake to start and covered it in green frosting. Next, I made a batch of rice krispie treats and shaped them into the top of the tower and the hill for my daughter’s river. I used the inside of a funnel (covered in cooking spray) to give me the shape I wanted for the roof. I used ice cream cones stuck end to end with chocolate for the base of the tower. The bottom cone was filled with chocolate to weight it down and give a little support to the tower. I rolled fondant onto the cones after covering them in icing (this was my first experience with fondant).

I used rolled up fondant and chocolates that looked like rocks to cover the base of the tower using icing as the “glue.” I secured the tower to the cake with skewers. For the river, I tinted the fondant blue and placed it on the hill of rice krispie treats. I placed a few of the chocolate rocks near and in the river. I added some depth to the river by mixing blue food coloring and water together. I lightly brushed it onto the blue fondant giving it a wet look. The top of the tower needed to look like Rapunzel’s home, so I covered it in different colored fondant. I cut small rectangles (three different colors that my daughter picked) and I started the shingles at the bottom and added one row at a time using frosting to adhere them to the roof. The same process worked to hold the fondant on the rest of the tower top. I secured the top of the tower with frosting and skewers to the cake.

I covered the visible skewers with frosting, so they looked like vines and leaves. The fondant flowers were added by my daughter. I piped vines, grass and leaves onto the tower and cake. I purchased each of the characters from a toy store and placed them on the cake just before it was time to sing! This is the second year in a row that I’ve done my daughter’s birthday cake and I am hooked. I can’t wait for next year already!