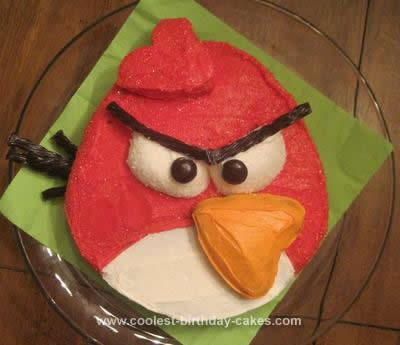 For my son Jack’s eighth birthday party he wanted an Angry Bird Theme. I had seen a lot of cakes online with scenes of the Angry Birds using candy and plastic figures from the game but he wanted his cake to be just the red bird. Unfortunately, none of my children enjoy the taste of fondant so I decided to make a regular frosted Red Angry Bird cake.

I spent a lot of time searching for the perfect thing for the eye balls because they are such an important feature of the bird. I decided on coconut pom poms with a junior mint in the middle. I cut them in half and angled them on the cake. For the eyebrows I used black licorice attached using white frosting and I also used them for the tail. For the mouth and the hair on top of the bird I used a small heart shaped pan that I used to make heart shaped cakes for Valentine’s Day. They worked perfect!

I used one cake mix and two containers of frosting. One I tinted red with food dye. It wasn’t a bold enough red for me so after frosting the cake I sprinkled red sparkles from Crate and Barrel to get the right shade. The food dye alone gave the frosting more of a pinkish color. The other frosting I divided in half and kept one half white and made the other orange using food dye.

After the round cake cooled for an hour I trimmed the cake to not be perfectly round. After frosting the white and red I attached the eyeballs, eyebrows, beak and top feathers. The licorice tail I just stuck in the side of the cake. I had cut them in three different lengths. For the round circles that are on the side of the beak I used red fruit roll up. I always cut the fruit roll up to the shape I want while it is still attached to the wax paper so it does not stick to my food scissor.

The cake was a hit! My son and all of his friends loved it and it was probably the easiest cake I had ever made for his birthday. Two of his friends asked me if I would make them a Red Angry bird cake for their birthdays!