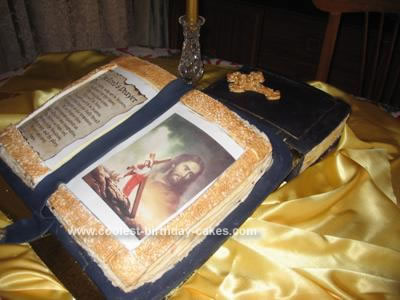 I decided to make a religious Christmas Cake as a practice for a Christening one that I want to make later this year. I made a large and smaller fruit cake as I had to make it a few days before Christmas. The large one as an open Bible and the smaller one as a closed Bible.

The larger one I cut the sides on a slant so it would look like an open book with pages. I then sliced in the middle of the cake. I covered the cake in butter cream icing and ran a comb around the sides to make it look like pages. I down loaded Biblical pictures and I printed them out on paper that had sticky removable backing that I purchased from the newsagent. I had actually used the paper before to down load photos to put on wine bottles.

I then removed the backing and placed them on alfoil. I used the alfoil to stop any oil coming through. Normally you would use edible images but I didn’t have time to organise it. After the pictures were laid down I put a border made of fondant around them and painted it gold. I then put black fondant as the Bible cover and put a black fondant ribbon with a tassel in the middle.

The closed Bible was done the same with butter cream icing and I used the comb to make pages around the 3 sides. I placed the Bible on black fondant to act as the cover and ran a gold pen down the back to look like the binding. I used a silicone cross mould that I purchased from the USA and painted it gold. I placed them on a board with gold satin and put a glass candle holder with a gold candle in it.

When I do the Christening one I will substitute the Biblical pictures with a poem about Angels and a picture of an Angel on the other side. As I am self taught I am open to challenges! The cake recipe is quick and simple. It is a very moist cake, only 3 ingredients, 1kg of mixed fruit, I actually use 750grams of mixed fruit and 250grams of chopped apricots, 600mls of apricot nectar and 2 cups of SR flour, Soak the fruit in the nectar over night then add the flour. Place in a large cake tin and bake on 180 degrees centigrade for 1hour and 15 minutes. Cool in tin. I line my tin with paper. If you don’t like apricots put 1kg. of mixed fruit with a carton of 600mls of iced coffee, soak over night as well.

Its really yummy and you can have it as a sweet with custard over the top.