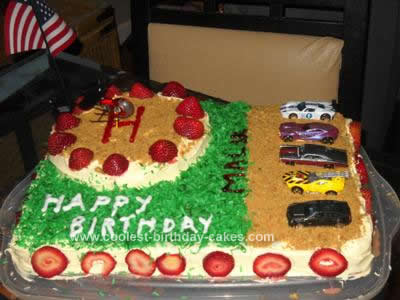 For my son’s 4th birthday, he was adamant about having a helicopter cake for his party due to the fact that he and his dad have this thing for flying remote control helicopters. I had no idea how I was going to make this happen because first of all I don’t bake, let alone have enough money to pay for someone to make an elaborate helicopter cake, so I had no clue what I was going to do. I decided to do some research on the internet of a Remote Control Helicopter Cake and typed in helicopter cake and was lucky enough to find this website where I was able to get some ideas, and from there the ideas of this helicopter cake came in to play.

I basically used a large turkey roasting pan I had, had that would equal about a ½ sheet cake for the two bottom layers. I followed a sour cream cake recipe that my mom makes all the time in a recipes she calls better than sex cake that has all kinds of fresh fruit like pineapple, bananas, cherries or strawberries

(whichever one is in season). There is also pudding, coconut, pecans, and chocolate. This cake is (delicious) she usually makes it for baby showers or anniversaries hence the name (better than sex).

For the round heli pad I made a standard chocolate cake. We where able to have the other round chocolate cake for fun so we could all enjoy some cake the night before the party. So over the heli pad the cake was three layers once the layers cooled I made a butter cream/vanilla icing that my mom makes fr the sour cream cake and since my son loves strawberries I incorporated them into the cake. I sliced strawberries in between each layer and utilized the tops for the red lights on the heli pad and around the cake just for decoration and taste of course.

The heli pad dirt and the parking lot dirt was made with crushed mothers oatmeal cookie crumbs, the grass was green dyed coconut. The cars of course where hot wheels. I added a flag since my son’s birthday was on July 3rd and we had fireworks to end the night, plus I do believe I have seen flags at airports and heli pads.

Overall we had a great time. He was happy and the actual helicopter was a small remote control copter held in place with a couple of tooth picks so it appeared to come in for a landing he was given the gift of the fully charged remote right after he blew out the candles. He was also able to enjoy the copter after the party. It was one of his presents, trust it wasn’t cheap for a remote control helicopter….but this was his favorite gift. Happy cake making.