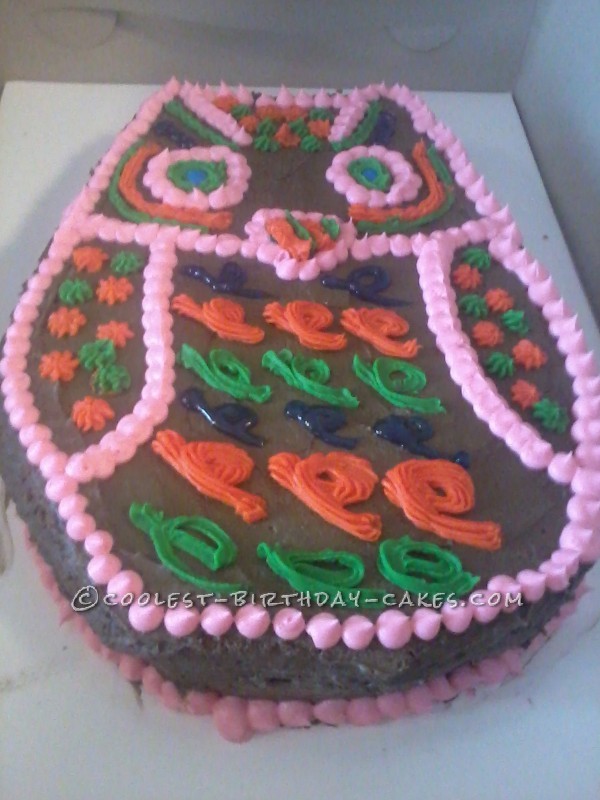 Found this Owl cake on Pinterest and tried very hard to duplicate it. Did not get to duplicate it exactly as it was very detailed but did the best I could.  I used an 11×15 sheet pan to bake the cake. After I left it cool in the refrigerator for 2 hours, I took it out and cut it into the shape of an owl.  I had pre-traced a shape of an owl on wax paper, then laid it on the cake and took a sharp paring knife and cut the shape of the owl around the wax paper.

I will tell you that it will be very crumbly and that is why I put it the refrigerator to firm it up.  I made a simply homemade butter cream icing and colored it brown. I iced the owl first and then set aside a cup of butter cream and tinted it pink. I piped in into a bag and used a round tip for the borders of the owl as seen in pink.  As far as the other decorations went, I used different color icing tubes to decorate the rest of the cake, M&M’s for the eyes and where the owl wings and top of head are I used a star tip for the appearance of flowers since I could not find premade candy flowers.  My friend I made it for was thrilled and it was tasty too – Enjoy!