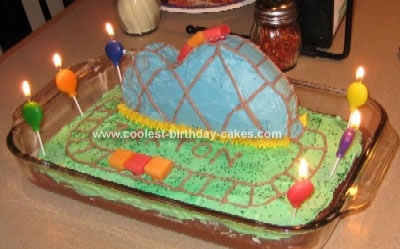 My 6-year-old son loves building roller coasters, so he helped me make this cake. We used one chocolate cake mix and baked half in a 9×5 pan and half into an 8″ round pan. After chilling the round cake, I cut it in half, which would become the coaster hills. I cut a small wedge out so that there would be two hills. (The remaining half circle cake was not used.) To frost the cake, I used almost 2 cans of store-bought vanilla frosting, adding green and blue food coloring for the grass and sky, respectively. I frosted these two sections separately, then placed the hills on top of the rectangle cake, which as the picture shows, remained in the 9×5 pan for easy transportation. My son added a bit of green sprinkles onto the grass. I mixed cocoa powder into some of the remaining frosting to get the brown color for the tracks and coaster supports. The frosting gun also came in useful for the flowers at the base of the hills, which helped hide imperfections at the junction. For the roller coaster cars, my son chose six Starburst candies. Each has 2 wheels made of mini M&M’s, glued on with a dot of frosting. I happened to find balloon-shaped candles to add as lampposts to my amusement park.