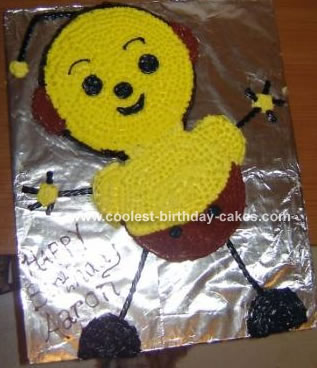 My sister in law and I came up with this idea of a Rollie Pollie Ollie to have for my son’s first birthday. She also made a little smash cake for him. It was very simple.

We baked a chocolate and a white cake for the head and body. The frosting was piped on using a star tip on the icing bag. The arm cuffs, the ears and the feet were the little angel food cakes cut in half. You can buy them at the store in packs of 6. The fingers, legs, arms and his antenna are black licorice. The eyes, buttons and mouth are also just black icing. Then we just covered a cake board in foil, and had to bend the antenna a little.

For my son’s smash cake, it was just 4 cupcakes made from the left over cake batter and iced. My sister in law drew the little Ollie on it with a straight tip on the end of the icing bag and then used the star tip to pipe on the yellow icing.

It was such a huge hit and everyone at the party commented on how wonderful it looked and the kids loved it!