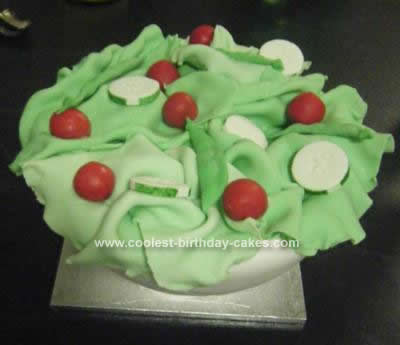 The inspiration for this Salad Cake Idea came when a friend asked me to bring either a Salad or a Dessert to her housewarming. With a keen interest in cakes I thought the only logical answer was to combine the two, hence this Salad cake.

The cake itself was just a basic chocolate cake baked in a Pyrex bowl to give the shape. When it was cool, I carved about a one and half cm deep section from the top leaving a lip around the edge for the ‘top edge of the bowl’. I find carving is a lot easier if the cake has had some time in the fridge or freezer.

Next I covered the cake in white fondant.

To make the lettuce, I coloured fondant green then rolled out pieces relatively thin, frilled the edges and arranged them on the top of the cake, folding/scrunching propping up with spare icing if needed till it looked like lettuce.

The cherry tomatoes were just balls of red icing

To make the cucumber, I used white fondant with the slightest hint of green, rolled it out to a thickness of a few millimeters than cut rounds with a circle cutter. When they had set a bit, I used a liquid green colour to paint the skin of the cucumber. The seeds were just an imprint using the end of a cake decorating tool.

The snow peas were made using the left over paste from the lettuce with more green colour added. I rolled this out thinly and then made little balls of fondant to resemble the peas. I place about four in a row, then folded the fondant over the peas and cut it into the shape of a snow pea. I used a small flower cutter to make the ends of the snow peas. 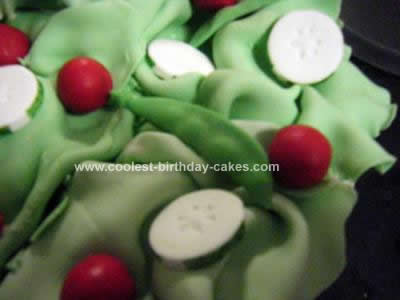