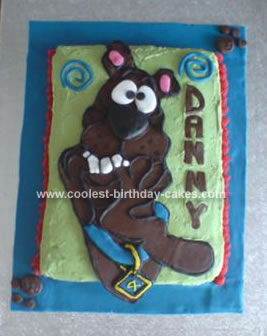 My little boy likes to set me challenges each birthday! So for his 4th birthday he wanted a Scooby Doo cake. I used the Nigella Lawson birthday cake recipe which is good for cutting up as it doesn’t crumble so you can cut shapes out of it if you need to.

For this cake I made the one square cake and trimmed the side then added it to the bottom to make the cake longer. (I stuck it together with jam/or you can use buttercream). I then covered it in buttercream which I had added Green colouring paste to till I got the colour I wanted.

I made the Scooby cake topper by freehand copying a picture of Scooby out of one of my son’s magazines. Each little detail was made by using regalice/sugarpaste blocks of icing that you can buy in every colour you can think of so its like playing with playdough. The swirls and footprints are also made from the same. I used Atlantic Blue coloured rolled out regalice to create the border.