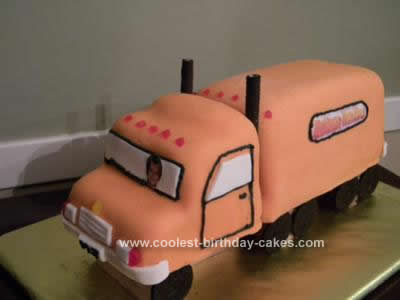 Our son Matthew LOVES semi trucks. I started this Homemade Semi Truck Birthday Cake Design by making a double recipe of chocolate cake & filled three loaf pans. Line the bottoms with parchment paper and use bakers spray on the sides, they popped out of the pans no problem! I stored them in the fridge and went to work on the fondant. I made a double batch of marshmallow fondant which tastes way better than store bought. I tinted half of it orange. I also made a batch of white buttercream frosting.

To prepare the cake board I covered it in foil. My husband cut blocks of wood which we glued to the foil and covered with cardboard cut to the size of the truck. We also glued the cardboard to the blocks of wood. I used two of the cakes stacked for the semi trailer but cut them down slightly to level. I trimmed the edges to make the whole thing as rectangular as possible with a serrated knife. Then, for the trailer I cut the remaining cake 2/3 of the way in to make two pieces. I trimmed them down a bit and used the big piece as the base of the cab. I then added the top of the cab and a rounded piece (left over from trimming off tops) for the rounded aerodynamic appearance on the top.

I covered the whole thing in buttercream. Used the orange fondant for the trailer and cab. White pieces cut for details like windows. We used candy for the lights (pieces of Dots gummy candy) and oreos for the wheels. We cut out a pic of our son and put it in the front window. Used Oreo sticks for smoke stacks. printed out the words “Matthew’s trucking” on paper and stuck to the sides. Used black frosting piped in for all the other details. 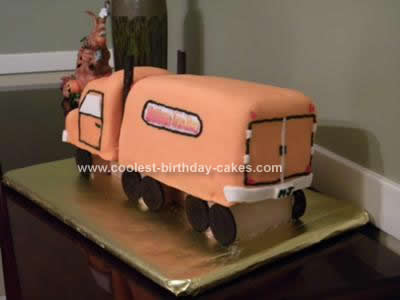 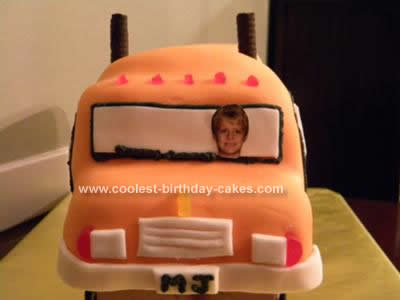