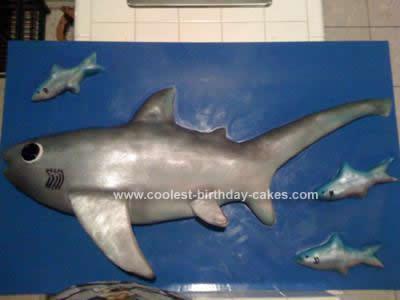 This Shark Birthday Cake was for my husband’s 25th birthday. We had a big party, at least a hundred people, and this fed them all. I baked a total of 6 13×9 cake, half vanilla and half chocolate. I stacked them on a prepared board, 3 end to end, then topped the first two with a second layer each. I used the remaining cake to make the fins and tail.

The cake was filled with half mocha and half vanilla butter cream. Once the cakes were stacked, I used a knife to carve them into the shape of the (half) shark. Once it was carved I covered it in vanilla butter cream, and white marshmallow fondant. I used colormist spray to paint the cake, using a combination of blue and black.

The bottom fin, which stuck out from the cake, was cut out of cardboard and covered in fondant, then painted with the rest of the cake. I used black gel to complete the eye and the gills. I gave everything a shimmery dust with food glitter once the paint was dry.