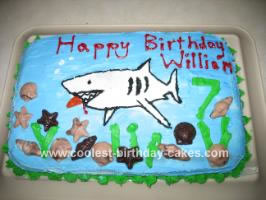 I made this shark cake for my son’s seventh birthday. We were planning a pool party, so I decided on a Swimming with Sharks theme to incorporate his fascination with sharks. I looked at many pictures on this site because I’m not much of a decorator and needed some ideas that could be done simple.

I made a chocolate cake (the recipe on the Hershey’s cocoa box never fails), and used store bought frosting. I downloaded a shark drawing from the internet, used it as a template to cut out the shape from a paper towel (tried waxed paper but that pulled up lots of frosting when removed), and placed the paper towel shark on the cake once the first layer of frosting was on.

I frosted all but the shark part in blue tinted frosting, then outlined the shark with a toothpick, then removed the paper towel and filled the outline in with black frosting. I piped on green frosting for seaweed (didn’t do the greatest job on that) and put shells on made with a candy mold using white and brown chocolate (white with a swirl of chocolate looked the most realistic). Stuck part of a Swedish fish in the mouth with a few drops of blood dripping (my son’s request, not my idea).

I also had Swedish fish, gummi worms and extra candy shells for snacking, along with candy sushi–made by combining crushed Rice Chex cereal with melted white chocolate, spread on an unrolled fruit rollup, topped with gummi worms, then rolled into a tube and sliced into sushi slices.