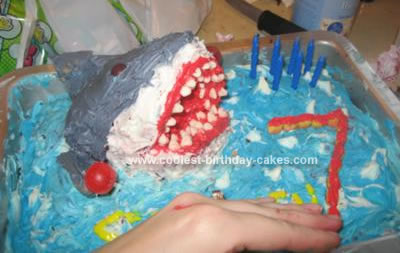 This site was a helpful visual guide on shark cakes. For the shark’s body, I took a little disposable aluminum loaf pan and molded it into a shark shape (with a pointy nose). Then I cooked a red velvet cake in it. While that was cooling I cooked a sheet cake. I let them sit overnight.

Next morning I put the shark in the freezer for 15 minutes to let it firm up. I cut a chunk off the bottom at an angle, so that the main body could be placed on an angle on the sheet cake. Then I took the chunk I cut off, and put that under the shark’s mouth to make the mouth.

I stabilized the body with a popsickle stick. I then carefully carved the mouth to make it shaped like a shark’s mouth, shaving off the insides to make it gaping. I used triangular cookies to make the fins, and stuck them on with icing. If I had to, I would have used graham crackers.

For the icing, I used store bought white tubs, and just colored them with food coloring. I did the ocean first, and went over the blue with some white to make the white caps. (I did warm the icing in the microwave to make it easy to spread). I did the grey of the shark first, and then the white, and then the red. I used brown skittles for eyes, and the white tips of candy corns for the teeth.

Joila! a shark cake to die for.