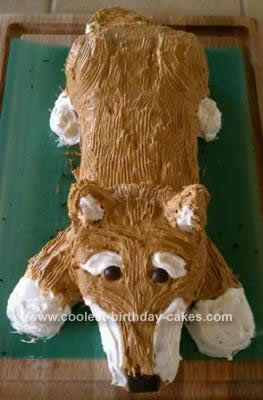 I really love my Shiba Inu, Cuda, and decided I would model a cake after him. I was practicing for my son’s upcoming first birthday. I have never done anything like this before and don’t have ANY tools. Still, I was very excited with the results of this Homemade Shiba Inu Dog Cake!

I just baked a 9×13 cake and an 8×8 cake. I froze the finished cakes for several hours before cutting. I sketched a rough picture on paper. I “drew” a line on the cake with the knife (a bread knife) before cutting. I used the 9×13 cake for his body and the 8×8 cake for his head. I used the leftover scraps for his front legs/paws, rear paws, tail and his ears. I cut at an angle on the “neck” area of the body so that the head would rest OK. I made home made cream cheese frosting and I used Wilton’s coloring gel to get the brownish fur color. I left the frosting uncolored for the white sections. I put a thin layer of frosting for the crumb coat and refrigerated the cake over-night.

The next day, I brought my cake to life. I frosted the white first and then the brown. I have a Pampered Chef roller and it has a small detachable pastry tool that I used to “comb” fur. I then used two brown M&M’s for his eyes and cut a Riesen in half, using the top half for his nose. I uploaded a picture of my dog to show my inspiration for the cake. 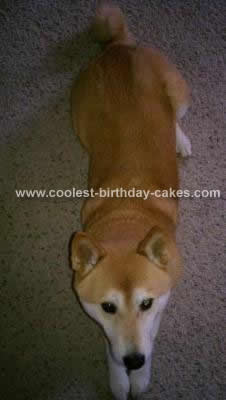 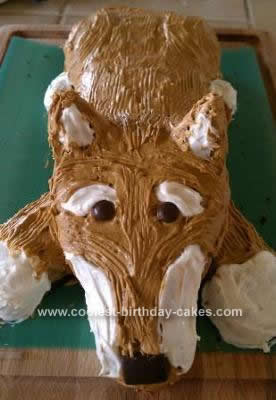