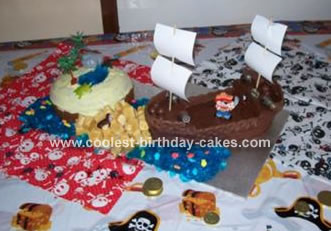 Part one: The Pirate Ship

This ship wreck island cake is made using Betty Crocker’s Devil’s food cake packet mix and comes with pre-made frosting which is the best cake mix I have found to date, so easy to make and sculpt.

I made two loaf pans then cut one into 3 sections. I stuck 2 portions on top of the other loaf cake, 1 at the back and 1 at the front leaving a space in the middle. I then sculpted the cake at the front of the cake using a sharp knife and stuck the levels together using Cottees Strawberry jam. I then iced the cake using the pre-made chocolate frosting.

I have decorated the cake as a pirate ship I used Cadbury Curly Wurly bars for the barricades, Nestle`Malteesers as the cannon balls and for the masts and sails I have use skewers and paper. I was able to use toy cannons and shoe plugs for other decorative touches and I located some pirate candles at Target.

This cake is made using Betty Crocker’s Vanilla cake packet mix and comes with pre-made frosting.

For this cake I made a standard round cake.

I pre- made some blue jelly and allowed it to set overnight and I iced the cake after I dyed the frosting to be a pale yellow to use as sand. I made a small hole in the top of the cake to be a shallow water hole and then filled it with some blue jelly.

I then added some toys (palm trees, crocodiles a rock and some turtles) these are what I used but of course use what you can find.

I placed both cakes on separate cake boards and set them on the table next to each other with space on the boards between each cake, I then placed some uncoated honeycomb as a rocky mountain at the side of the island cake and I then scattered the remainder of the blue jelly around the cakes to form and ocean effect. I added a few more plastic sea animals and some lolly fish in the jelly and on the honeycomb.

I made this cake for my son’s 2nd birthday and it was a hit. It’s a little extravagant so if you like you can just make the pirate ship section on its own. 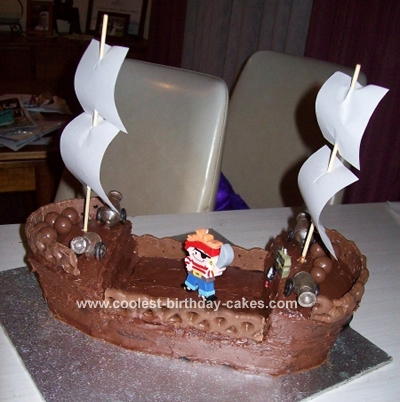 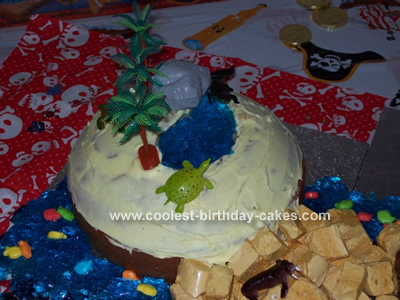