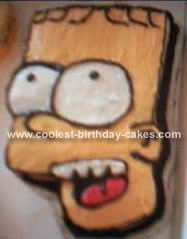 This Simpsons cake is the very first cake I did. It was done for my brother on his 15th birthday. My dad actually gave me the idea and sort of set me along the right path.

I baked a 9 by 15 in cake. I believe that was the measurement. Anyhow, it took two boxes of cake mix. After that I let the cake cool in the freezer. The head was only a piece of the whole theme. So while that cooled I baked the other cakes I needed.

After the cakes were done cooling I had previously drawn a template of Bart’s head I placed on the cake and cut around it. I then mixed the frosting colors I needed with food coloring and vanilla frosting. I then just followed my template of Bart and free handed the others and frosted the cakes.

The theme was a sub sandwich party. So the cake was comprised of a Bart head because he likes the Simpson’s and a mini sub sandwich and a thought balloon that said subway.