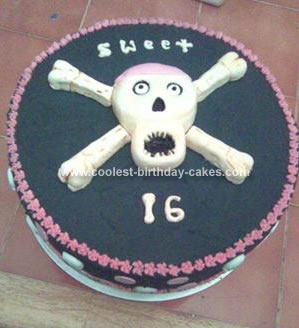 This Skull And Crossbone Cake is the very first decorative cake I have ever made. My best friend’s daughter was having her 16th birthday and really wanted a skull and crossbone cake. We live in a very rural area and knew of nobody who would or could make the cake she wanted so badly, so I decided to try it.

I used a 12″ round 3 layer cake pan. The cake was covered in butter cream icing. The skull and crossbones were sculpted from fondant the day before and refrigerated. It was not the traditional skull face I made him unique and with a scared expression because of the 16th birthday (you know driver’s license and dating).

The polka-dots where made of fondant and the skulls on the side were candy skulls from the cake store. I didn’t use the traditional edging on the cake because I wanted it to be unique. I made the edges out of drop flowers and a fondant bandana to make it girly.

I heard it was the hit of the party and the birthday girl called me immediately crying cause she wanted this cake and was surprised with it the day of the party.

It was fairly easy and I would suggest it to anyone.