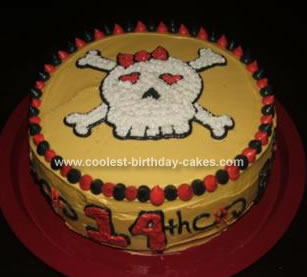 I made this Skull Birthday Cake for my best friend’s 14 year old daughter. I had originally planned on doing a pink and black girly skull cake, but she wanted yellow, so I added the red so it didn’t look like a bee with just yellow and black.

I just used a strawberry bake mix this time and baked 2 8″ round cakes and stacked the layers with strawberry jam. I used the Wilton buttercream recipe and frosted the cake in yellow buttercream. I freehand drew a skull from a picture I had printed online. I then outlined in black and filled in the white and red with star tip 16.

The black and red “spikes” were supposed to be round balls, but I couldn’t get them to stay rounded on top (it never occurred to me to pat them down when they dried). But I think it added to the “punk” effect of the cake anyways by having them as spikes. I didn’t want the writing to be squished on the top of the cake, so I wrote it on the side.