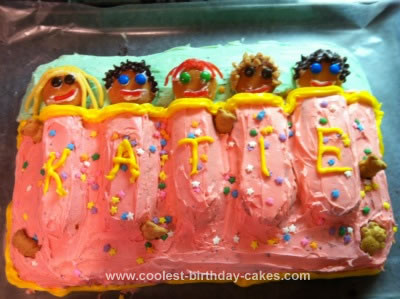 My daughter has been begging me to make a Sleepover birthday cake for four years now, and her 11-year-old sleepover party seemed like the perfect chance to do so. Pretty simple to make, just time consuming.

I baked a 13×9 chocolate cake from a mix, then mixed up a full can of vanilla frosting and added 8 drops of red food coloring, then 1/2 a can of vanilla and mixed with 8 drops of green. I lightly frosted, then cut Twinkies lengthwise, laid them across the middle and frosted over.

I used Nilla wafers for the faces, mini M&M’s for the eyes, licorice for the mouths, and candy bits for the hair (mini chocolate chips, Heath toffee bits, licorice strands, chocolate sprinkles, use your imagination). The wafers are leaning on marshmallow pillows, which are just halved marshmallows smashed down with a dab of icing in the center to “glue” the wafer in place. Added some Teddy Grahams teddy bears and some star sprinkles, used some cake icing in a can to make a border, and voila, it’s a dentist’s dream on a plate!

My daughter went crazy over it, and I’m sure her friends will too. What’s not to love?? It took about 3 hours to make, including baking time, but that’s because some of the decorating is detailed, so you can get as intricate as you choose. But it’s very fun to make.