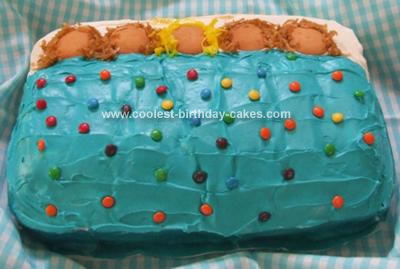 This Sleepover cake I made for my daughter and I got the idea from this website ( as usual). I used a chocolate fudge cake mix and added crushed Oreos to the mix and baked it in a 13×9 pan. I bought Nilla wafers, mini M&M’s, flaked coconut that I colored different colors ( yellow for blonde and brown for brunettes), fruit roll ups for the skirt, two cans of cream cheese frosting, and Twinkies. Once the cake was cooled I lightly iced the top of the cake,(so the Twinkies won’t slide) then cut the Twinkies in half and placed them on top of the cake like it was children in a bed.

Next I used the white icing to go over the entire cake and Twinkies ( I call it the crumb layer), then placeD it in the freezer for about thirty minutes. While that’s setting, reserve a portion of the white icing to go back over with a final layer where the “sheets” are under the heads, then color the rest of the icing blue (mine was a green blue).

Now take the cake out of the freezer and ice where the “sheets” are, then ice the “bedspread” with the blue icing, I used the blue fruit rollups(cut up) to go around the bottom of the bedspread, then placed mini M&M’s for decoration on the bedspread. Place the Nilla wafers where a head should be then put hair on it with the colored coconut (to color coconut just place the amount of coconut you want colored in a plastic bag with a drop of food color and a drop of water and shake until desired color).

That’s it! Thanks for the idea! She loved it!