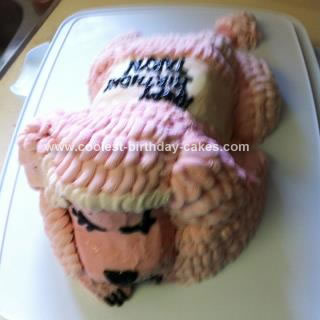 I had to use all gluten free products for this one which made it difficult as many may know, even down to the butter cream icing being flavored with freshly crushed raspberries,

For this sleepy pink poodle gluten free cake I used probably the equivalent of two boxed gluten free cake mixes. I used two 9″ round pans and two three inch round pans (for back paws). First I leveled the cake, then I cut the cake in half, so that I now had four pieces of cake. I stacked and filled them, and put them upright for the back. I then cut one of the small round cakes in half and also leveled it, stacked and filled for the back paws.

Then I cut the second 9 inch round into three pieces, two long ones (outside edges for paws) and the rest was used for a head piece which was also filled and stacked and glued into place with more icing, the second small round cake (just a fraction bigger than a cupcake) was cut in half and glued in place on the sides of the head. I took a scrap piece of cake and iced it and stuck it at the end as a tail then I dirty iced it and put it into the fridge to cool, and let the icing set.

Then about half an hour later I went back and used a Wilton tip #98 to do curlicues for poodle fur, around all the parts I wanted fluffed out, leaving just the face the toes and a small part of the torso as smoothed icing. I used Wilton sparkle gel in black to add final details for the face and writing happy birthday.

I looked online for quite a while to see if there was another poodle cake like mine but sadly I haven’t found one even though I only used Google (so as it stands mine is the coolest).