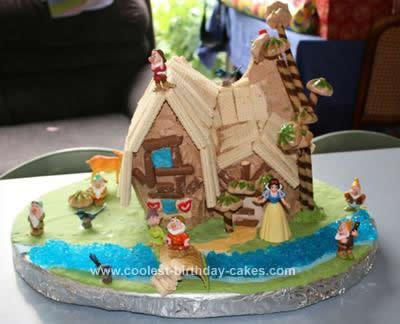 I began by flicking through a few sites for ideas and printed out about three different designs. I asked my daughter which type of cake she would like and the house was chosen. She also said that Snow White, The Seven Dwarfs and animals to be included. Chocolate was to be the flavour, so from there I set to work on this Snow White and the Seven Dwarfs Cottage Birthday Cake.

I tried three different cake recipes out, as I was a bit out of practice and realised that my biggest mistake was over cooking. They were cooking a lot quicker than the recipe suggested and were drying out. I made a decision on a fudge cake recipe and made three square chocolate cakes, but really, four would have been easier.

I carved out the smaller roofline and cut off some of the back of the cake. These loose pieces I used to build up the taller part of the house. I decided to use a butter cream icing with some melted chocolate in it to ice, colour and help stick the layers of cake together. I thought that the vanilla wafer biscuits would make a good roof and stuck them on with a toothpick in each one. I also sprinkled some edible gold glitter on the roof. Gaps and the roofline were moulded by the icing and I used mars bars to create the chimney.

The little chocolate stick biscuits were used to be the wood frame and I coloured in the windows with blue writing icing from a tube. The trees were made form bought mini chocolate meringues which I put green edible sparkle gel on and used the Biscotto rolled wafer biscuits for trunks and joined them together with tooth picks. The tree was a little unsteady.

I covered a chopping board with tin foil and coloured store bought royal icing to make the grass, garden path and edge of river. I used blue jelly to fill up the river- which the kids also enjoyed eating and used a broken waffle cone to make the bridge. The steps were bits of wafer biscuit.

It was great fun to do and everyone was very impressed.