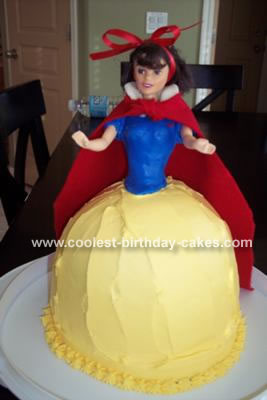 My daughter-in-law asked me to make a princess cake for my granddaughter’s 6th birthday party. The whole party was going to be about princesses and my daughter was even dressing up as a princess to surprise all the little girls. Two days before the party, my granddaughter mentioned that she wanted her cake to be a Snow White cake and to look just like her Halloween Costume (which was Snow White).

So, I made homemade marshmallow fondant(Recipe on internet). I had to cut the doll’s hair to make it shorter like Snow White. I used Royal Blue gel food color to color the fondant for the bodice and sleeves of the dress and then used plain white fondant for the collar.

I used a glass bowl to bake one cake mix and two 8″ rounds for the other. Make sure to grease and flour or use Release so that cake comes out easily. After cooling the cakes, I wrapped and froze them, which made the decorating so much easier. I cut the 8″ rounds to match the size of the bottom of the main cake and also sliced off some of the main cake to make the skirt taper more rather than look so rounded.

I used canned fluffy white frosting in between the layers and to glue the cake to the base I set it on. Then I used it as a crumb coat. I then used more fluffy white canned frosting and colored it yellow and added some extra powdered sugar to make it stiffer. (four cans total of frosting) I spread it on the skirt with a large offset spatula and smoothed it out. Then I used a medium star tip to finish off the bottom edge. I had put strips of waxed paper under the cake to keep my base clean while frosting it and then pulled them out before I finished the hem of the dress with stars.

I used a red ribbon for her hair and made the cape out of red felt. The most difficult part was molding the bodice of the dress. The cake kept well overnight in the refrigerator as I had to make it the day before the party.