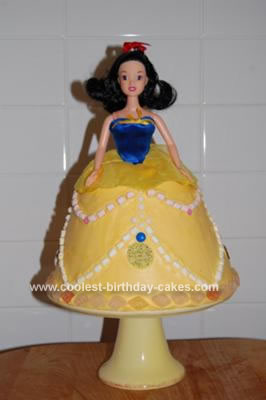 This is a traditional Princess birthday cake… make a sponge “skirt” and then put an appropriate doll in the top. I did mine by cooking two Victoria sponges, one in a large Pyrex bowl and the second in a smaller Pyrex bowl… I did find that they took ages to cook and started to burn slightly… so my advice is to cover them with grease-proof paper when you are cooking.

Once cooled, I inverted them and had to take a slice off the larger one so that the smaller one fitted well… I stuck them together with jam. I managed to find a Snow White doll dressed as ballerina, which was perfect because I avoided having to cut her skirt. My husband discovered that her legs clicked off, so only had to cut a small hole in the top for her to sit (and my daughter got a new doll to play with after the cake was eaten!).

I covered the homemade Snow White cake in yellow buttercream (it takes quite a bit of colouring to get a decent yellow colour) and then decorated with sweets. In hindsight, I should have piped stars all over to make the skirt… the effect would have been more dramatic…. next time maybe! The look on my daughter’s face was worth the late night…she immediately ran upstairs to dress up as Snow White!