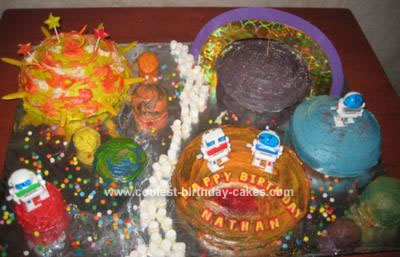 Mercury, Earth’s Moon, and Pluto are cake-donut holes, dusted in colored powdered sugar. For the bigger planets I bought an expensive soccer ball dome pan at Hobby Lobby, which was a waste of money. I ended up just baking regular size cakes and trimming them into domes. Cupcakes were Earth, Venus, Mars, Uranus, and Neptune, also trimmed off the edges to create a circular effect.

Sun and Saturn were white cakes, Jupiter was chocolate sheet cake made from scratch (the fav!). Made ahead and frozen, then iced the night before the party in Buttercream icing.

Asteriod Belt was marshmallows dipped in icing to stick. The Ring of Saturn was a piece of funny foam and a metallic gift bag cut to size, held up by a toothpick. Sprinkle little cupcake decorator stars all around and Viola!

This Solar System Birthday Cake was a big hit, especially with my 4 year old.