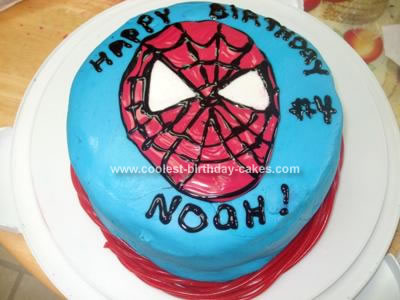 This was the first time ever that I had worked with fondant icing. Let me tell you that it isn’t ans easy medium to work with. Television shows like the Cake Boss make it look so easy, my hat is off to them. I bought the fondant powder and I attempted to make the first batch that seemed too runny at first but I waited for it to cool well then I added my blue food coloring.

I kneaded it then rolled it out on a covered surface and it took me a couple attempts to get the whole thing to cover the whole cake at once before it started to tear apart. I tried to mix the second batch that seemed to dry an crumbly so I went and bought some of the same brand “Virgin ice” ready made rolled fondant at the local bulk barn.

Then all I had to do was section out what I needed since there was 4 lbs of it in the container. I first rolled out a large ball, put the cake pan over it to see how much less I needed to judge for Spiderman’s head and then I rolled out the ball with a rolling pin and used a sharp knife tip to trace out the shape of the head and the eyes of his mask.

I separated the eye pieces of the mask since that had to stay white and gathered the remaining piece for the head to add red food coloring. Don’t be clueless like me and knead in the red food coloring with bare clean hands our you’ll end up with purple hands! Buy some clear plastic food server gloves like I forgot to buy lol.

I rolled out the red ball, shaped it once more with the knife, cut out the eye pieces to add in the white fondant for Spiderman’s eyes on the mask.

For the Web pattern on his mask I used black gel icing from a small point tip tube. I first drew a black outline around Spiderman’s face then I drew an x from one corner to the opposite lower corner then drew semi circles an lines to link it together to form a web pattern. Refer to the photo to see what I mean.

Now I asked my dad what he thought of the fondant today at my son’s party since they share a birthday on the same day and he said it’s texture was like puddy. I guess he’s a hard core frosting lover but the kids seemed to mac it down without haste so as long they enjoy..Let them eat cake!