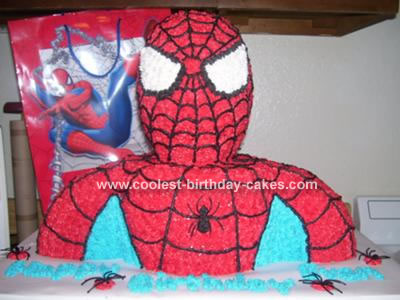 I made this Spiderman cake for my grandson’s second birthday. I saw several cakes like this on this website and I decided to try it. It was really easier than I thought it would be.

For the body, I baked two cakes using 9″ round cake pans and one 9″ round pie pan. The shoulders were also made from a 9″ round cake (cut in fourths). For the head, I used a foam football. I cut and shaped the ends of the football so it would look more like a head and placed a dowel rod in the center of it and stuck it in the center of the cake. The cake (and the football head) is decorated with homemade buttercream icing using a star tip.

The black webbing is also buttercream icing that I piped on with a small decorating tip. The spiders are just plastic Halloween spider rings. Spiderman was a big hit at the party and my grandson was very excited with his cake.