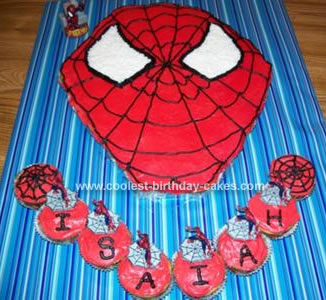 Thank you for this site! I got this idea for a Spiderman cake from here and wasn’t going to submit it but did because I wanted to share a couple of things I added.

When the mom picked it up I had it set up as this picture is but the smaller cupcakes went in a box for her to set up when she got to the party. All she had to do was cut the tape at serving time. Transported perfectly.

Also, I was using Wilton’s icings in the tubes and had done the eyes stars with the white, that went fine, but I was half way done with the top of the head when the stars started coming out all mushy, like my hands made the icing to hot. So I ended up just squeezing all the red out and frosting it with a knife.

Smoothed it with the knife dipped in a little water. Dabbed up any wet spots, let dry, then put the web on.

What a great idea the cupcake were! Thanks again!