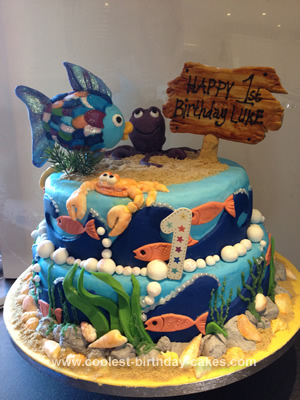 I’m very new to cake making-decorating. I have only made 3 and that is in the last 8 months. First my own wedding cake, then my friend’s wedding cake and now this one for my friend’s son’s first birthday party.

They love the book called The Rainbow Fish so wanted that included in the cake. Their party is going to be called a ‘Splish Splash Fish Bash’ with a water-sea theme so I came up with a design idea and gave them a picture of how I thought it might look. They seemed pleased and then I just had to make sure I could produce the goods!

I was really worried to say the least as I hoped I hadn’t promised something I couldn’t deliver and I don’t mean by car! I took a day off my full time job to get started, bought all the materials and set to it. The detail I had promised was no easy feet I tell you! Ever regretted making promises!? Yep, me too at this point.

I mixed all the colors using sugar paste and edible inks to create the look I wanted for the waves and sea. I had an inspired idea to use demerera sugar for sand too – that worked out really well I thought!

It was certainly a labor of love. I spent around 20 hours in total making the shells and painting them, making the fish and using the inside of a garlic press to make the scales. I used green ready made piping icing for the seaweed and made larger seaweed from green colored sugar paste.

Here’s hoping they love it. 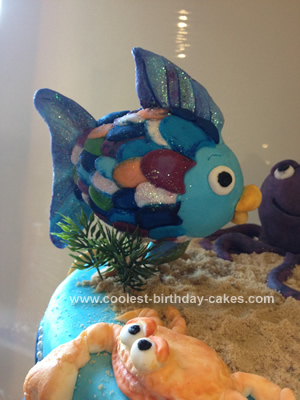 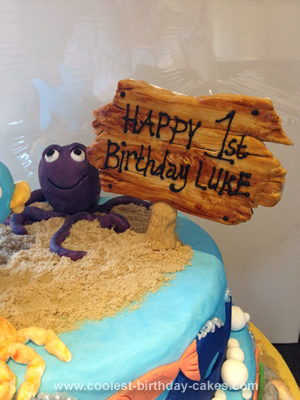