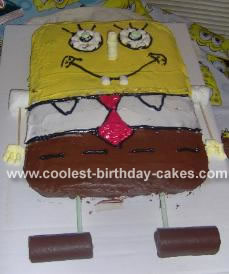 I made this Spongebob cake for my step daughter, it was her 5th birthday party and she wanted Spongebob. So I started out baking the cake, 1 box of yellow cake mix in a 13x9in glass dish. I used white & chocolate icing (Betty Crocker). I first mixed the white icing in yellow food coloring and made the body of Spongebob, then I took the plain white icing and made his shirt.

I used the chocolate icing for his pants then I mixed a small amount of white icing and mixed with black coloring and made the outline if his eyes, mouth and belt for his pants, mixed the white icing with red food coloring and made his tie (you can use a sandwich ziploc baggy and snip a very small hole in the corner to outline.) Then for his legs and feet I used a straw cut it in half and shoved in the cake for legs and placed a ho ho cake for each foot.

There you have it, Sponge Bob! She loved it!