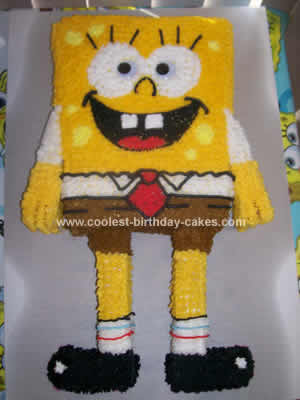 I made the Spongebob cake from a regular rectangle cake pan. First, I cut a piece of paper the same size as the cake and used it as a template to figure out how to cut the cake to make the legs and arms. I cut off approximately 2 inches from the bottom and used each piece to make the legs. I cut off about 2 inches from each of these pieces, turned it sideways, and that was his shoes.

For his body, he is really more of a square than a rectangle and he angles in at the bottom, so I cut off a triangular piece on each side of him and used this for his arms. I covered the entire cake with the star tip using buttercream icing. You can ice him ahead of time, but I would wait until that day to do the final detail – the black icing may bleed on the white. I added the plastic googly eyes as well. TIPS: Make sure you put a dot of icing under his legs and arms to anchor them to the cardboard. You also need to try to ice the inside of the legs before anchoring them down; otherwise, it will be very difficult to ice the insides of his legs because they are so close together.

For the Spongebob rice krispie treats, I made two batches of treats and stirred yellow food coloring in the marshmallows after they melted. I cut them into rectangles. I piped the face using a round tip with white for his eyes, followed by a smaller blue dot, and then a tiny black dot. His mouth was a simple smiley. For his pants, start at the bottom and pipe two lines of brown (I used the smooth side of a basket weave tip). Then, pipe a line of white. Drawing his red tie is the hardest part. Rice Krispie treats get stale quickly so do not make them more than a day ahead of time. You may also want to wait until the last minute to finish his eyes so the icing doesn’t bleed. 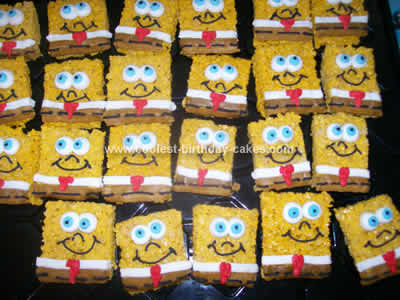