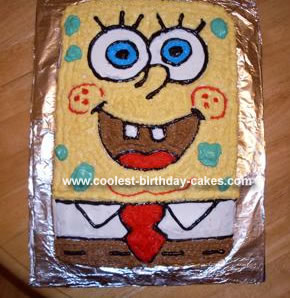 My 8 year old daughter is crazy about Spongebob and she asked me to do a Spongebob Square Pants Cake for her birthday party. I printed out a few basic pictures of just Spongebob’s face and practiced drawing in on a large sheet of paper a few times.

Then I made a regular chocolate 13×9 inch cake. I lightly frosted the whole cake with white icing (mainly because it was a chocolate cake and I did not want the brown to show through any frosting gaps). I then took tooth picks and drew Spongebob in the frosting, outlined everything I drew in black icing, then used star tips and filled in the rest.

I used basic food coloring and white icing to make all of the colors except brown and black. I saw a Spongebob food coloring set at a party store but figured it would be the same as the coloring I had at home. I wish I would have gotten the kit mainly for the yellow. I wish the yellow I used would have been a more “popping” yellow instead of basic.

Regardless, my daughter screamed when she saw it and said she loved it so the end result was successfully achieved!