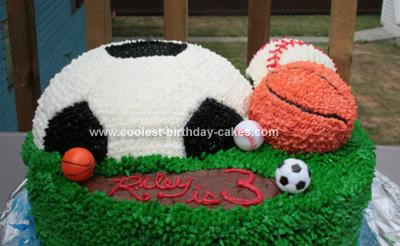 I put some grass in between the baseball and where I was placing the basketball. Then I skewered the basketball in place and iced that. However if I were to make this again I would have iced the sides of the balls that were going to touch the soccer ball before placing them on to hide the knooks and crannies.

I’d also only do a single layer for the base because the cake was to big for the amount of people it was going to feed. It’s not what I had pictured originally but I think it looks better than my first plan. The little balls are picks I got from Scoop ‘n save. I used them to draw the mini ball lines. I used the Wilton star tip(#16), tip #3, and the large grass tip. I also used thin consistency icing so it would go faster.

This was much easier than my last cake, and my nephew absolutely loved it. He was so cute!