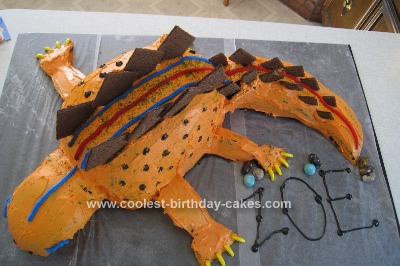 I made this Homemade Stegosaurus Birthday Cake for my daughter’s third birthday. She loves dinosaurs and happened to be particularly into Stegosauruses at the time. I had a great time with this cake and best of all, it was a big hit with her.

Support for the Cake:

Because of the size of the cake, I was a bit concerned about how to support it and whether I’d be able to move it around slightly without breaking it, etc. So I purchased a large piece of foam board to function as the platform for the cake. I covered this with wax paper to prevent the cake from sticking to the foam board, wrapping the wax paper around the board and taped it to the board underneath so that it would not move. Since I ended up doing a lot of the shaping and cutting of the cake while it was sitting on the board, having the wax paper there also allowed me to get rid of excess cake and crumbs easily so that the board still served as a pretty serving platform.

This cake took about 6 boxes of Devil’s Food Chocolate cake mix. I used three different pans: 1) a round, 12×3 inch cake pan, 2) a standard aluminum bread pan, and 3) a small round aluminum mixing bowl. The day before the party, I baked two cakes in the 12×3 pan. This pan makes a huge cake, so two of them is a LOT of cake all by itself. I used 2.5 boxes of cake mix per 12×3 inch cake, but you will want to check the volume of cake your mix produces and adjust accordingly. Most boxes of mix will make one 9x13x1 inch cake in a rectangular pan so that’s 117 sq inches of volume. By comparison, a 12×3 inch cake pan produces a cake which is ~ 340 inches of volume, (Pi x r-squared x height). That’s almost 3 times as much, but I found that 2.5 boxes of mix did the trick fine. With the remaining box of mix, I baked one cake in the bread pan and put some batter in the mixing bowl and backed that as well. So I had four cakes when it was all said and done. I let all of these cool overnight.

First step was to move one of the large cakes to the foam board, just a bit right of the center of the board’s longest side. Then, I skimmed the rounded top off of *one* of the two large cakes. I put frosting on top of the cut side of this large cake, then gently placed the other large cake on top of it so that they were “glued” together, leaving the rounded top of the second large cake facing the top. I then took the cake out of the bread pan and placed it, upside down, behind and to the left of the stacked round cakes – this would be the tail. I took a large knife and rounded the tail as best I could, tapering the cake toward the end. To achieve a point to the tail, I took some of the cake I had cut off and placed it at the very end. The cake in the round mixing bowl was used for the head. I placed this one, upside down, in front of and to the right of the stacked round cakes. I then used the knife to shape it into something more like the wedge-shaped head that stegosauruses have. With some of the leftover cake I had cut, I made very rough placeholders for the legs and feet on either side of the “body.”

The first step was to cover the whole thing in frosting. I used a cream cheese frosting which I dyed to be orange. The frosting was great for covering up some of the seams and I also used cake scraps to provide filler in areas where there was not a super-smooth transition between parts. Using frosting piped from a tube, I added some colorful details to the body. The scales were made with chocolate graham crackers inserted into the cake diagonally. And the claws were made from banana runts candy. I finished it off with black gel frosting for my daughter’s name, applied directly to the wax paper and “dinosaur egg” rock candy placed at various points around the board. 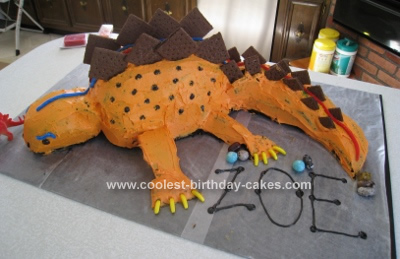 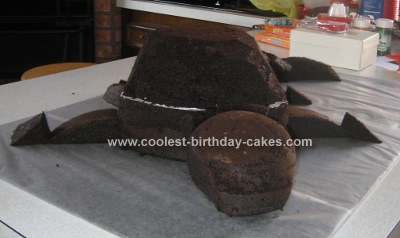