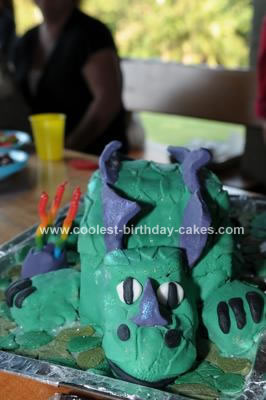 I made this Stegosaurus cake for my son’s 4th birthday party (but it could very easily be converted into a dragon or crocodile). The body was made from a round chocolate cake, cut in half across the top to make 2 half moon shapes and sandwiched together with caramel (sweetened condensed milk boiled in the microwave until golden brown), then placed on the tray with the cut side down.

The head, feet and tail were cut from a large rectangular chocolate cake and shaped. The whole cake was covered in rolled green fondant stuck on with more caramel. I cut out loads of “scales” with a teardrop shaped cutter and stuck those onto the body and tail, then coloured some of the fondant purple to make the two rows of bony plates down the sides of the body and tail and the spikes on the end of the tail.

I coloured some icing black and used it to make the mouth, nostrils, pupils for the eyes (which were just white) and claws on the feet. I used leaf cutters to cut out hundreds of leaves in light and dark green to scatter on the foil covered tray. I sprinkled the entire dinosaur with edible glitter.

To make a dragon replace the bony plates with wing shapes and for a crocodile leave them off completely and add some sharp white teeth!